Half a Million Bank Jobs Have Vanished Since 2008 Crisis: Chart

Staff reductions at some of the world’s biggest banks are far from over. Deutsche Bank AG, which has held employment close to its 2010 peak, plans to slash 26,000 positions by 2018, following a trend that began with the financial crisis. 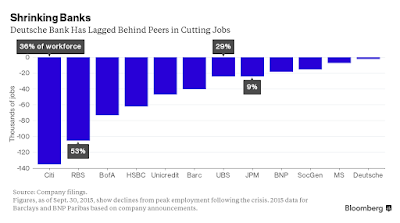 Announced cuts in the fourth quarter total at least 47,000, following 52,000 lost jobs in the first nine months of 2015. That would bring the aggregate figure since 2008 to about 600,000. UniCredit SpA says it will eliminate about 18,200 positions. Citigroup Inc., which has reduced its workforce by more than a third, plans to eliminate at least 2,000 more jobs next year.

Source-Bloomberg Business
Posted by OIW Trust Associates LLC at 9:47 AM