Getting In On Canada’s $30 Billion Marijuana Boom

A new commodity boom is coming to Canada. And this time, it is going to be a green rush.

Marijuana is expected to be legalized in the country this year. And the market could be worth nearly $23 billion or more annually.

The clock started ticking in April 2017. That’s when new legislation legalizing the recreational use of marijuana in Canada will be introduced. If approved, the law is anticipated to go into effect on July 1, 2018.

While other companies will be scrambling to catch up, one company has been quietly preparing to meet Canada’s appetite for cannabis. Invictus MD (TSX:IMH.V; OTC:IVITF)—has been building a diversified cannabis company. And it is ready to capitalize on Canada’s newest cash crop.

Legalizing marijuana was one of Canadian Prime Minister Justin Trudeau’s most controversial campaign promises. It helped him win the youth vote in the 2015 election.

Under the bill’s provisions, the country’s federal government will oversee supply and licensing of marijuana. Canada’s provinces would then decide how marijuana should be distributed and sold. Provinces will also set prices.

Canada’s pending marijuana legalization at the federal level isn’t much of a surprise to the country’s citizens. But investors have mostly ignored this important cannabis milestone.

Instead, cannabis investors have set their sights on the U.S. market and state marijuana mandates.

Marijuana legalization has been minting millionaires for years. And 2016 was another lucrative one for American marijuana investors.

Medical Marijuana, Inc. (OTCBB: MJNA) was a massive winner in 2016. Shareholders of the pot stock pocketed over 412 percent in 2 months.

But that isn’t even the most impressive gain.

The share price of American Cannabis Co. (OTCBB: AMMJ) sky-rocketed during 2016. Its stock rose an astonishing 1,610 percent in just a few short months.

But these triple digit returns are becoming harder and harder to come by in the U.S. The cannabis bull market has stalled. It may even be dying.

That’s because U.S. Attorney General, Jeff Sessions has publicly opposed state marijuana legislation. Since marijuana has not been legalized at a national level, he’s even hinted at enforcing federal laws in states where marijuana is currently legal.

Until now, investors have largely ignored Canada’s cannabis opportunity. But that’s about to change.
Very soon, these investors will look north of the border to find their next cannabis cash cow. By then, the next Canadian marijuana bull market will have already begun to heat up. And when it does, it will likely be bigger than the U.S. run was.

If the U.S. federal government decides to roll back state marijuana laws, U.S. marijuana market growth will undoubtedly slow. The $50 billion in sales that some have projected won’t be met. Worse, the market may even shrink.

But since Canada is legalizing cannabis at a national level, Canadian marijuana companies don’t face the same risks as their American peers. And the Canadian market is still a massive one.

That’s more than three times the $6.7 billion dollars of marijuana sales recorded in the U.S. during 2016.

That same study calculated that the Canadian retail marijuana market alone could be worth as much as $8.7 billion a year. And the ancillary market, including growers, fertilizers, testing labs, security and infused products, would generate annual sales of nearly $14 billion.

Add in marijuana-fueled tourism and these estimates could prove to be too low.

The total market will be huge, and Invictus MD (TSX:IMH.V; OTC:IVITF) has a first mover advantage to capture a significant portion of it.

Founded in 2014, Invictus MD has spent the last three years creating an integrated cannabis company. And it’s positioned itself to be the first to market on several fronts.

Since it is still in its infancy, the sector is highly fragmented with many small players. Rather than inventing a cannabis business, Invictus MD is perfecting it.

Invictus MD was designed to roll-up the most promising marijuana industry businesses. It now focuses on licensed producers in Canada.

Today, the company’s businesses focus on two verticals: cannabis cultivation and cannabis fertilizer and supplies. This way, the company profits from the coming green rush by selling cannabis as well as from supplying “picks and shovels” to other marijuana prospectors.

In December, Invictus MD announced that it had reached an agreement to acquire a 33.33 percent stake in AB Laboratories Inc., a Licensed Producer under the Access to Cannabis for Medical Purposes Regulations (ACMPR) and a 33.33 percent stake in AB Ventures Inc. AB Ventures Inc. is a newly incorporated company formed to develop a second licensed expansion facility on 100 acres in Hamilton, Ontario.

Based in Hamilton, Ontario, AB Laboratories owns facilities that grow marijuana. It received its cultivation license on October 21, 2016. The company expects its sales license to be issued during the second quarter of this year.

AB Ventures will close on its 100 acres of expansion land on May 1, 2017 at which time a 42,000 square foot cultivation facility will be built. Plans are in place to rapidly expand on that property once it receives its license to cultivate. AB Ventures/AB Labs is expected to grow its cannabis production capacity by 1900 percent in two years - from 1,000 kg in 2018 to 20,000 kg in 2020.

But AB Ventures/AB Labs isn’t Invictus MD’s only bet on the marijuana farm. Invictus MD (TSX:IMH.V; OTC:IVITF) will also exercise the option to acquire Acreage Pharms within 30 days of March 29, 2017, after which they will own 100 percent. Its potential cultivation capacity is even larger than AB Ventures/AB Labs.

Acreage Pharms has a 150-acre property able to accommodate a three-phase expansion plan. It received its ACMPR cultivation license March 29, 2017.

Upon completion of all Invictus MD’s expansion plans, the company will have the capacity to cultivate and sell in excess of 50,000 kg of cannabis. That will make Invictus MD one of the top producers in Canada.

And Invictus MD’s large geographic footprint gives it another advantage over the competition. Its cultivation facilities are spread across Canada. This enables the company to become a country wide cannabis supplier while significantly lowering its distribution costs.

Assuming an average selling price of $5 per gram, Invictus MD’s cultivation businesses could be generating annual sales of $350 million by 2020. 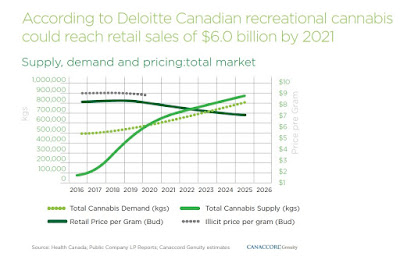 Supply cannabis cultivation supplies is a high margin business. Especially since 95 percent of the products that Future Harvest sells are its own.

And the business is getting more profitable. During the seven months ending on January 31, 2017, Future Harvest reported that its gross profit margin was 51 percent - up 63 percent from the prior year’s same period of 33 percent.

But enviable margins aren’t the only way Future Harvest is benefiting Invictus MD and its shareholders.

Invictus Inc. paid $900,000 for its stake in Future Harvest - Sunblaster. In February 2016, the company announced it had sold Future Harvest’s Sunblaster grow lighting line for $5 million of which Invictus MD’s portion was $3.75 million. The sale netted Invictus MD a 316 percent return on its investment in just 11 months.

The company drove most of the proceeds of the Sunblaster sale back into Future Harvest. Invictus MD spent money on research and development, next to this, it acquired bottling equipment to further increase its fertilizer revenue.

Besides all expansion and R&D activities, Invictus MD also rewarded its shareholders. The company declared a $1 million dividend in November. It was one of the first, if not first ever dividend payment made by a marijuana company. The dividend was approximately $0.07 per share.

The legal marijuana industry is a new one. It’s highly fragmented with many small businesses attempting to create a new business model.

Most of these marijuana pioneers have little business experience and their profitability has suffered. But Invictus MD’s management team combines the best of both worlds. The company is led by seasoned business executives and cannabis experts.

CEO Dan Kriznic is a proven and seasoned entrepreneur. He founded Invictus MD in 2014 to meet Canada’s demand for legal cannabis.

He’s built several successful businesses from the ground up. One of his most successful is Eminata Group, Canada’s largest private education and training provider.

He has also helped develop companies in the real estate, mining and senior care sectors. Under his watch, these companies have grown from nominal to over $750 million in enterprise value.

A CPA, Kriznic, adds a unique blend of financial as well as strategic acumen to the Invictus MD team.

Phillip Hague is Invictus MD’s Chief Scientific Officer and Horticulturist. He joined the company in late 2016 and is responsible for expanding Invictus MD’s production capacity.

A leading expert in the cannabis industry, Hague has overseen over 1 million square feet of cannabis cultivation space in the U.S. He has designed, built and staffed some of the largest cultivation facilities in the U.S.

Hague has developed many of the most successful brands in the cannabis industry and his expertise is often featured in the media as well as industry publications.

Legalized marijuana is coming to Canada. And Canada’s cannabis business is primed to become the largest in North America.

Largely ignored by investors, Canada’s cannabis market is about to come under the spotlight. The April 10th introduction of the bill to legalize recreational marijuana was the start. As the legislation moves closer and closer to becoming law, interest in Canada’s new industry will reach new highs. And early investors will have the chance to pocket big gains.

Invictus MD’s multi-channel cannabis model allows it to profit from both sides of the cannabis market.

It is building the facilities that will make it one of the largest in Canada. Sales could reach $350 million by 2020 – seven times Invictus MD’s current market cap.

At the same time, it’s solidifying its position as a preferred cultivation supplier selling the fertilizer and other products necessary for cultivating Canada’s newest cash crop.

2017 is shaping up to be a historic year for Canada’s cannabis companies. Multiple catalysts including approval of the new law and cultivation licenses issuances will drive investor interest in the sector.

Few investors have recognized the coming green rush in Canada, but they will. And it won’t be long until they see that Invictus MD (TSX:IMH.V; OTC:IVITF) has built a company primed to profit from it.

This communication is not a recommendation to buy or sell securities.

This communication is for entertainment purposes only. Never invest purely based on our communication. Gains mentioned in our group newsletter and on our website may be based on end-of- day or intraday data.
Posted by OIW Trust Associates LLC at 6:58 PM