Consumer Sentiment in U.S. Plunged in May by Most in Two Years

Consumer confidence unexpectedly fell in May by the most in more than two years as Americans’ views on the economy dimmed. 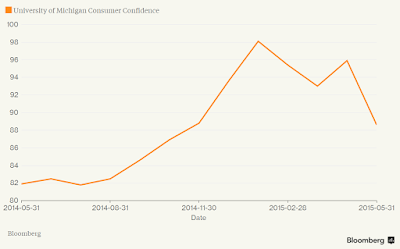 The University of Michigan preliminary index of sentiment dropped to 88.6, the lowest since October, from 95.9 in April. The 7.3 point decrease was the largest since December 2012. The outcome was lower than the lowest estimate of 68 economists surveyed by Bloomberg.
News that the world’s largest economy stalled last quarter shook Americans’ outlook, while the tick up in fuel costs since early March also contributed to the gloomier perceptions. While slightly lower than in the prior month, households still held relatively upbeat views on incomes, a sign spending will be sustained.

“The decline was widespread among all age and income subgroups as well as across all regions of the country,” Richard Curtin, director of the Michigan Survey of Consumers, said in a statement. “To be sure, the recent decline in consumer confidence does not indicate an incipient downturn in consumption and residential investment. Rather the data indicate a reluctant acceptance on the part of consumers that economic growth will remain near the same lackluster pace recorded during the past several years.”
The median projection in the Bloomberg survey of economists called for an unchanged reading at 95.9. Estimates ranged from 91.4 to 97.5. The gauge averaged 88.8 for the five years leading to the last recession that started in December 2007. The average for 2014 was 84.1.

The index has shown bigger declines than in May in only 20 months since the monthly surveys began in 1978.

The sentiment survey’s current conditions index, which takes stock of Americans’ view of their personal finances, fell to 99.8 from the prior month’s 107.

The measure of expectations six months from now decreased to 81.5 from 88.8.
“The data nonetheless suggest that consumers remain optimistic about their future personal finances and have maintained their buying plans are reasonably favorable levels,” Curtin also wrote.
Americans expect the inflation rate in the next year will be 2.9 percent, compared with 2.6 percent in the April survey. Over the next five to 10 years, they expect a 2.8 percent rate of inflation, compared with 2.6 percent in the previous month.

Regular gasoline cost $2.69 a gallon at the pump on Thursday, according to AAA, the biggest U.S. motoring group. While the price has ticked up from a six-year low of $2.03 reached in late January, it is below the $3.64 consumers paid at this time last year.

The labor market continues to underpin consumer spending. Payrolls climbed by 223,000 in April following a 85,000 gain, and the jobless rate fell to 5.4 percent, the lowest since May 2008, according to Labor Department data released last week.

Wage gains, though, remain tepid. Hourly pay was up 2.2 percent in April from a year earlier, holding within the narrow range tracked over the past four years.

The Michigan sentiment report shows a bigger retreat in confidence this month than other measures. The Bloomberg Consumer Comfort Index fell to 43.5 in the period ended May 10, the lowest level since early March.

Recent reports indicate consumers remain reluctant to open their wallets. Sales at retailers barely budged in April after a 0.2 percent drop from January through March that marked the first quarterly decline in almost three years.

Automobile dealerships have had better luck as cheap fuel costs boost demand for large and luxury sport utility vehicles and overall sales remain strong. Cars and light trucks sold at a 16.5 million annualized rate in April after 17 million the prior month, according to industry data from Ward’s Automotive Group.

Posted by OIW Trust Associates LLC at 8:51 AM